on February 28, 2021
An extremely rare poppy shirt worn by Ofir Marciano in the Hibernian vs. Aberdeen match played on November 6th, 2020 at the Pittodrie Stadium in Aberdeen. Hibernian lost the match 2-0, both goals scored in the first 15 minutes of the match (Scott Wright 5', Sam Cosgrove 12').
The shirt is short sleeved, and only contains a premiership patch on the right sleeve. Prior to this season, all teams competing in the Scottish Premiership wore shirts that had patches on both sleeves. This had been done away with as the league is now allowing the teams to get sponsors on the other sleeve. In addition the shirt has a "Thank You NHS" sponsor on the front, in appreciation for National Health Service workers in the UK helping in the fight against the Covid-19 pandemic.
All of the shirts worn in this match featured a British Poppy patch in the center of the shirt. They were later auctioned for charity (which is how I got a hold of this shirt). This was also the first time that Hibs auctioned off their poppy shirts.
This is the fourth Marciano Hibernian shirt in my collection, and the only one that is short sleeved. 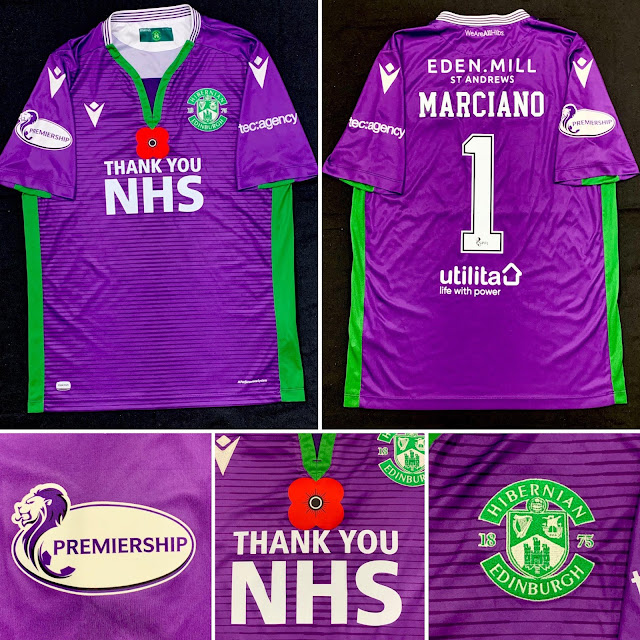